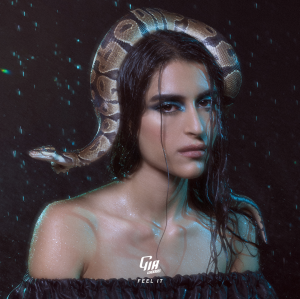 The song arrives today via Disruptor Records. Get it HERE.

“Feel It” highlights her sultry vocals as they careen over beckoning production. The verses illuminate the nuances of her powerhouse delivery, creeping back over synths before vaulting to the forefront. She draws in breathy verses before exhaling a climactic hook impossible not to feel.

Once again, her creative and personal diversity exceeds the bounds of electronic, pop, indie, and dance. She emerges as a crossover phenomenon as a result. Stay tuned for the music video’s debut soon!

Another personal banger, “Feel It” intimately explores the feeling of infatuation for a girl crush.

Gia explains, “To me, this is one of those perfect moments where the sound of the song sounds like the feeling in the lyrics. It’s slinky and seductive. It sort of creeps up on you. You can dance to it, but it’s not aggressive. It’s sensual and fun—just like the beginning of a heavy crush.”

In celebration of PRIDE across the country, Gia ramps up her breakout year with a series of special performances in June. Check out the full confirmed itinerary below for June!

On the heels of recent single “One Big Party,” she continues to turn heads and earn further acclaim. Billboard exclaimed, “Woods’ versatile voice sounds equally at home on heavily produced pop tracks as it does in acoustic sets,” and Earmilk put it best, “Her star is on the rise as one of the most interesting voices in the modern pop landscape.” Paper claimed, “Gia Woods’ voice is up there with some of the most seductive ones in pop history – each note carries all the allure of Britney Spears’ In the Zone era and all the ferocity of P!nk’s Funhouse.”

“Feel It” follows a number of successes for Gia. Her breakout single “Only A Girl” earned praise from Billboard, millions of streams and over 10 million YouTube views. As she quietly attracted a following, she wrote and sang on Matoma’s 2017 hit “Heart Won’t Forget,” which generated over 33 million Spotify streams. This is only the beginning for one of 2019’s artists to watch. Bringing honesty, truth and a fresh LGBTQ perspective to music, she is here to change the game.