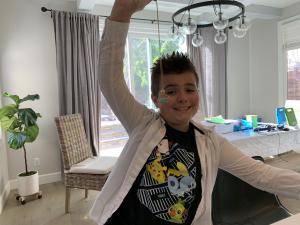 Malachi Showing Off His Invention

I've always wanted to be an inventor and build all kinds of cool gadgets and robots and stuff, but sometimes it's hard to do things with autism”
— Malachi Mitchell

Just in Time for Autism Awareness Month in April, A young autistic boy has come up with an ingenious idea to harness the power of a trending beauty tool and take it to new heights!

Gemstone facial rollers have become a must-have beauty item on many women’s shelves over the last couple of seasons. The handheld tool has rollable gemstones like jade or rose quartz on either end and beauty buffs say they offer an instant cooling and relaxing facial treatment that helps to drain excess fluid and toxins from the skin and increase circulation.

Ten-year-old Malachi Mitchell was fascinated by the tool while watching his mother use it in the evenings. It wasn’t long before he was trying it out on himself, rolling it on his arms and neck, which he found soothing. As a child with autism and ADHD, anxiety is a common occurrence and Malachi’s mother Alana was relieved to find something that calmed his nerves.

“I wanted my mom to bring the roller with us everywhere so I could use it whenever I wanted, but we couldn't really do that because it was too big,” explains Malachi.

It was then that the aspiring inventor came up with the brilliant idea to turn the roller into a necklace that he could take on the go.

“Our jaws dropped when we heard his idea, then dropped again when we realized that his idea was completely unheard of,” said Alana, “Malachi has struggled in the past with bullies and other children not understanding how he is, but the process of inventing a successful product and obtaining a patent has really given him a boost of confidence!”

The gemstone necklaces can be used for people and children like Malachi who enjoy tactile stimuli, or as a stress reliever for those who feel the need to fidget, or even as a tool to cultivate mindfulness or awareness.

“I've always wanted to be an inventor and build all kinds of cool gadgets and robots and stuff, but sometimes it's hard to do things with autism,” says Malachi, “My mom says we need people like me in the world because we think differently!”