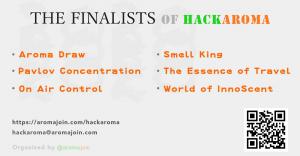 Broadcasting scent over the internet is an amazing feature. We plan to make it an official function of Aroma Shooter this Fall.”
— Chu Bao Trung – Aromajoin's Software Engineering Manager

KYOTO, JAPAN, August 8, 2020 /EINPresswire.com/ — Japanese startup Aromajoin hosted the final pitch event of 'Hackaroma,' the company's and the world's first digital scent hackathon. Aromajoin live-streamed pitches via Zoom, where each participant demonstrated their scent projects with an Aroma Shooter, Aromajoin's own digital scent device, and a set of 6 aroma cartridges. Before each demo, viewing participants prepared their devices such that every Aroma Shooter contained the same set of matching aromas. During a demo, whenever a speaker triggered their scent cartridges, the same combination of cartridges were emitted through the devices of the viewers. In this way, Hackaroma finalists broadcasted scent over the Internet for the first time ever in real-time.

Six finalists from all over the world participated in the event. Three in Japan, one in Australia, one in Sweden, and the last in Colombia. ‘AromaDraw’, an online multiplayer game, took first place. In ‘AromaDraw,’ one player draws a picture of a common object, while an AI engine evaluates their drawing and diffuses smells through the Aroma Shooters of all other players. After smelling, players are asked to guess the subject of the drawing and assigned scores based on each person's ability to make correct judgements. Other interesting projects included using scent to help people toggle instantly between working and relaxing states of mind, controlling scent diffusion using hand gestures, an AR-based scent-matching game, a multi-sensory culinary menu, and a fantasy RPG.

Aromajoin, ecstatic about reactions to the event, intends to sponsor Hackaroma annually. The company expects future hackathons to build upon the growing functionality of the Aroma Shooter and its software.

The matte black version of the Aroma Shooter is now available at half price, USD $498, during Aromajoin's ‘Scent For All’ campaign, which ends August 31st, 2020: https://www.aromajoin.com/scent-for-all

The Aroma Shooter is a 6-chamber aroma emitter that completely abandons liquid media (no vapor, nor mist, nor steam). Based on Aromajoin's proprietary solid-state fragrance material, the device simply transports scented air on command, making it nearly impossible for odors to mix together unintentionally, even as scents change at high speeds. The Aroma Shooter gives creative people the means to activate and transition discrete (or blended) scents as smoothly as visual content on a screen or sound through a speaker.

Aromajoin's mission is to change the world with aroma communication. In practical terms, the startup is pioneering development of a true, end-to-end digital scent infrastructure, imagining a future where scent information travels as seamlessly as text, audio, and video.