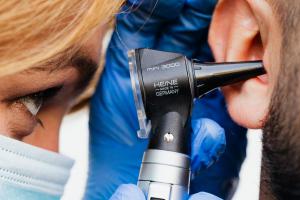 Studies reveal the importance of proactive hearing health to conditions such as Alzheimer’s, Dementia, and cognitive decline to untreated hearing loss.

Untreated hearing loss is the single most important risk factor within our control regarding the development of Alzheimer's, Dementia, and overall cognitive decline.”
— Dr. Gabriel Pitt, AuD.

Study after study continues to reveal the importance of proactive hearing health, linking conditions such as Alzheimer’s, Dementia, and cognitive decline to untreated hearing loss.

Savannah, Ga., Oct 29, 2020—Recent studies by renowned researcher, Dr. Frank Lin, MD, PhD, at Johns Hopkins School of Medicine, continue to underscore the correlation between untreated hearing loss and an overall decline of mental health in older adults. Dr. Lin and his colleagues found hearing loss to be prevalent in nearly two thirds (67%) of adults aged 70 years and older, and the effects of this hearing loss on adults is quite substantial.

Dr. Gabriel Pitt, Au.D, and Chief Audiology Officer at Optimal Hearing, quoted the famous 2011 study, as well as more recent research, highlighting the importance of being proactive with regards to better hearing. “The science is pretty clear. Untreated hearing loss can significantly reduce the individuals ability to drive and walk safely, not to mention the associations with Social Isolation, overall mental and cognitive decline, and a significant increase in risk of falls,” Dr. Pitt stated.

“Dr. Lin’s recent research has also shown untreated hearing loss to be the single most important risk factor under our control that can have a preventative effect on the development of Dementia, Alzheimer’s, and overall cognitive decline,” Dr. Pitt continued. “The single most important step an adult can make in being proactive about their hearing and overall health, is to have their hearing checked by a licensed hearing care professional on a regular basis.”

Dr. Lin’s study also found the percentage of hearing aid wearers in the United States, where Medicare typically excludes hearing aid coverage, is on par with the adoption rates in the United Kingdom, where hearing aids are covered by the National Health Service (NHS). “Access and affordability are not the only barriers to proper hearing health care.” stated Dr. Pitt. “What Optimal Hearing has been trying to accomplish, since being founded by my grandfather in 1961, is to educate and inform the general population on what have believed to be true for almost 60 years, but science is only beginning to fully understand. Overall health is directly connected to hearing health.”

If you or a loved one are experiencing any of these symptoms, then please seek the help you deserve.

Optimal Hearing is a family-owned and operated Hearing Technology Company that was founded in 1961 with the goal of providing high-quality hearing assistance to our local communities.