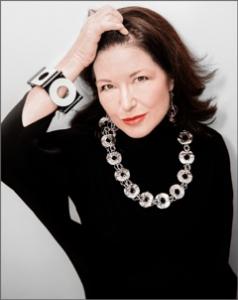 “There’s Tiffany, Cartier & then, there’s SCULPTURE TO WEAR”. – Where Magazine

LOS ANGELES, CA, UNITED STATES, January 14, 2021 /EINPresswire.com/ — On Jan. 16th, 2021 Visionary Proprietor Lisa M. Berman of Sculpture To Wear Gallery will celebrate their 22nd Anniversary. The inaugural exhibition Structural Integrity – Jewelry's Foundation in Bergamot Station Art Center in Santa Monica not only launched the West Coast iconic gallery but the careers of dozens of important designers of today. Sculpture To Wear, similar to the Algoncqin in NYC was the gathering place to find the most interesting and cutting edge works creating a new genre of art – Wearable ART by international artists. Art Directors and Stylists loved working with the unusual pieces because they made a bold statement and Berman innately understood their vision. From the cutting edge shows which were curated geographically or with a specific theme in mind, the works were shown in a museum quality presentations and caught the eye of collectors and museums alike. Berman has placed jewelry, paintings & photographs in museum collections of the Renwick Gallery of the Smithsonian, LACMA, the GETTY, MAAD, etc. Her most recent exhibition titled, "Feel the Frill" honored the late Supreme Court Justice, Ruth Bader Ginsburg and received contributions of COLLARS from around the world. The first piece purchased was from the one of the most prominent donors / collectors / museum makers on the West Coast.

“When it comes to understanding contemporary art jewelry, I’ve never met anyone who gets it like Lisa does. This is a microcosm of the fine art world in general and like any other art form, it's about understanding the nuance of design, material and the artists commitment. Lisa has developed a new vocabulary for looking at artwork which very few people speak in," states Robert Berman, Gallery and Auction House owner and expert of Man Ray in the United States.

Wearable Art, although technically jewelry from the un-converted eye is considered a niche market – Berman is committed to changing that and its place in the Art world. Even during the COVID-19 pandemic, Sculpture to Wear sold the largest collection of the Robert Lee Morris ARCHIVES to a single collector during Morris' vast 50-year long career! Also notable, all eight pieces were purchased via email, never touched by the collector (who had no prior knowledge of RLM before Lisa’s 45 min. interview on the Jewelry Journey Podcast) and trusted the expertise of Berman’s guidance. "Lisa is a wonderful addition to my professional world, and I appreciate all that she does and say and all the efforts she spends on my behalf. We lovers of Sculpture to Wear need to stick together and grow this light filled force as much as we can," states Coty Award and unprecedented 3-time CDFA Award recipient, legendary jewelry designer, Robert Lee Morris. Sculpture to Wear has been named the “Official West Coast Representative for the Robert Lee Morris Archives.

Sculpture To Wear International Contemporary Art Jewelry is the quintessential link between the artist and collector. The work represented is conceived from visionary imagination, evolved through the creative artistic process and solidified into the indelible from cultivated craftsmanship. Wearable art from the gallery has been featured in hundreds of magazines (Vogue ELLE, W, Vanity Fair, People, BAZAAR, Angeleno, TV shows and films and has “attended” the MTV awards, The Emmy’s, Governors Ball, and the Academy Awards.

Dorris Raymond, owner of The Way We Wore Vintage boutique and TV show of same title, also thinks highly of Lisa and her gallery. Dorris states, “Lisa M. Berman is the (Coco) Chanel of Los Angeles. No one wears her wares like Lisa." This 22nd Anniversary is quite an achievement and we have no doubts that many more successful years are to come.

Sculpture To Wear gallery is a place to explore the legacy of wearable art. The first owner, Joan Sonnabend, presented only jewelry by fine established artists such as Alexander Calder, Man Ray, Pablo Picasso, Jean Arp, and Louise Nevelson. Sonnabend also launched the career of Robert Lee Morris, who opened his iconic Artwear store and has traversed various genres of fine, studio, fashion, and costume jewelry in his illustrious career. According to writer Gloria Lieberman, speaking about the original location in NYC, “Sculpture To Wear was responsible for the creation of a market for artists-made studio jewelry in the United States.” Today, Sculpture To Wear continues that legacy with presentations of eclectic works in metal, textiles, and unexpected and recycled materials.

The global Wearable Art movement emerged at the close of the 1960s, flowered in the 1970s, and continues in the early 2000s. It is no accident that wearable art crystallized at the end of the tumultuous 1960s. The social, political, and cultural upheavals of that decade provided fertile ground for personal expression and explorations into body adornment. Wearable art, for all intensive purposes, was first the “step-child” of the art world, as photography was 60 years ago and was passed over without a glance. The addition of technology and the collaboration of the previously established mediums combined made ART Jewelry into a small, yet indelible impact into the global artworld. The important by-product of this transition is the verifiable and collectable markets of this genre, especially into fine art museums and notable cultural institutions.

"I am so pleased someone understands how special this work is and that Lisa is doing so well. Lisa is our hope for the future of ART Jewelry," concludes Helen Drutt, considered by most as the Grand Dame of Art Jewelry in the United States (Founder of the Helen Drutt Gallery just celebrated her 90th Birthday & currently sits on the Advisory Council for the Smithsonian and many other boards).

Lisa M. Berman, is the Visionary Proprietor of Sculpture To Wear, a gallery instrumental in launching studio jewelry in the United States. Berman curates exhibitions and places collections into museums, as well as offering an eclectic array of art, jewelry and unique objects via her gallery installations to discerning collectors, media and art institutions, which have been featured in multiple films, television and publications. She is also the founder of Berman Arts Agency, Director of the Oropeza Sculpture Garden, Official West Coast Representative of the Archival Collections of Robert Lee Morris and Cara Croninger. In 2020, Berman was appointed as the first Ambassador for the Milan based company ARTISTAR Jewels in the United States and her gallery is the first to collaborate with their global brand. Berman continues to be a trailblazer.

Berman is a consultant for Jewelry, fashion, design and fine art-her expertise extends to major markets, museums, and corporations in the United States, Canada, Mexico, Asia, and Europe. Based in Southern California, Berman has served on the Board of Governors for Otis College of Art and Design, as Public Relations Chair for the Fashion Council at LACMA, and on the museum collection board at Fashion Institute of Design & Merchandising. She was recently appointed to the Advisory Board of Pulitzer Prize-winning photographer Renée C. Byer’s nonprofit, Positive Change Can Happen. Berman volunteers for projects supporting wearable art/studio jewelry and STEAM (Science, Technology, Engineering, Art, and Math) projects. Berman recently collaborated with sculptor and ArtPrize winner Daniel Oropeza to launch the six-acre Oropeza Sculpture Garden at the Nursery by SouthWinds in Irvine, CA, which also hosts an atelier for Sculpture To Wear.