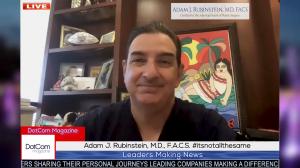 Having Dr. Adam J. Rubinstein on the series was a true honor. Not only is he one of America's leading plastic surgeons, but his prominence as an advocate for patients all around the world is amazing!”
— Andy "Jake" Jacob, CEO, DotCom Magazine

Adam J. Rubinstein the leader behind the #ItsNotAllTheSame series, joins other leading CEO’s, founders, and thought leaders that have participated in this informative and popular video interview series. In the interview, Adam J. Rubinstein discusses launching of #ItsNotAllTheSame series, the Instagram series discusses controversial topics in plastic surgery in a humorous yet truthful way to educate people on how to make informed decisions. The series is designed to make the point, with humor, that all plastic surgery is most definitely not the same. Through the series, Dr. Adam Rubinstein reminds patients to seek the appropriate doctors who are board-certified and properly trained to ensure great results and safety. Adam J. Rubinstein joins other leaders building strong and compelling companies that have been invited to participate in the exclusive video series.