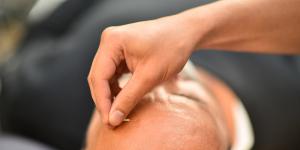 Some high-quality randomised controlled trials demonstrate efficacy and effectiveness for acupuncture in the treatment of hay fever.

In Chinese medicine, it is believed that unbalanced meridians may cause problems to our body. Practitioners use acupuncture points to help the body's "Qi" flow by stimulating points along meridians.”
— Phoebus

LONDON, UK, May 11, 2021 /EINPresswire.com/ — Warm weather brings escalating pollen levels. It comes with hay fever. Hay fever is the common name for allergic rhinitis, which causes symptoms such as sneezing, itchiness, and watery eyes. The hay fever season starts in early spring and lasts until late autumn. Hay fever may last for weeks or months, unlike a cold, which usually goes away in a week or two. It's a very common condition. It estimated to affect around 1 in every 5 people in the UK.

What causes hay fever?
Hay fever is an allergic reaction to pollen, typically when it comes into contact with your mouth, nose, eyes and throat. Pollen is a fine powder from plants. The immune system then produces antibodies that signal your body to release chemicals(histamine) into your bloodstream, which cause reactions of the body and hay fever symptoms. Some risk factors may increase the chance of developing hay fever:
• Early age allergic condition such as eczema and asthma cause an allergic reaction in the nasal passages to weather changes, pollen, dust or specific allergens.
• Chronic irritation by air pollution, medication, pollen and other allergens.
• Some neurological disorders can also trigger allergic rhinitis, such as depression.

Does acupuncture work for hay fever?
Acupuncture has been used to relieve discomfort associated with various diseases and conditions, including headaches, osteoarthritis, lower back pain and menstrual problems…

Some high-quality randomised controlled trials demonstrate efficacy and effectiveness for acupuncture in the treatment of hay fever. One study of 414 patients found the acupuncture group used antihistamines significantly less often than the other groups. Acupuncture has also been recommended in the clinical practice guideline for allergic rhinitis in the United States.

One systematic review published in 2020 found acupuncture plus conventional medicine are potentially the most effective allergic rhinitis treatments.

How does acupuncture for hay fever?
In Chinese medicine, it is believed that unbalanced meridians may cause problems to our body. Practitioners use acupuncture points to help the body's "Qi" (energy) flow by stimulating points along 14 meridians. According to herbalist and acupuncturist in London Phoebus Tian, MBAcC.

He also said some research found the efficiency of acupuncture for hay fever is related to cytokine(an essential part of the inflammatory process) profile regulation and neuropeptides(small proteins produced by neurons).

Is acupuncture safe?
When it's done by a qualified practitioner, acupuncture is generally very safe. Acupuncture side effects are very rare.

4 Tips for hay fever
1. Wear a hat and sunglasses to minimise exposure to the eyes.
2. Shower, wash your hair after spending time outdoors.
3. Quit smoking as chemicals in cigarettes, and the smoke irritates the mucus membranes.
4. Alcohol may increase allergy symptoms. Try not to avoid it when hay fever is bad.