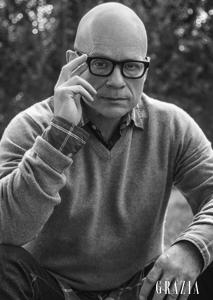 Mr. Sessums was both a Contributing Editor and the Fanfair Editor of Vanity Fair where he wrote 28 cover stories during his time under famed under famed editors Tina Brown and Graydon Carter.

Mr. Sessums will also write for Grazia Gazette: Hamptons Edition that reaches more than five hundred thousand unique readers throughout the most prominent high-traffic areas in The Hamptons — from Southampton to Montauk — and direct to targeted homes.

The first edition of the Grazia USA flagship title will be a 400+ page September 2021 issue.

Few in the industry understand the intersection of New York, Hollywood, entertainment, culture and the arts like Kevin."”
— Grazia USA Editor-in-Chief David Thielebeule

One of the foremost culture writers of modern times, Mr. Sessums is the author of two New York Times bestselling memoirs, Mississippi Sissy (2007) and I Left It on the Mountain (2015). Mississippi Sissy made also won the 2008 Lambda Literary Award for Best Male Memoir.

He was both a Contributing Editor and the Fanfair Editor of Vanity Fair where he wrote 28 cover stories during his time under famed under famed editors Tina Brown and Graydon Carter.

Mr. Sessums will contribute to the forthcoming fall fashion debut, a 400+ page collector’s edition to celebrate Grazia’s arrival in the United States. He will also write for graziamagazine.com and the Grazia Gazette franchise, a new 'green friendly' and 100 percent carbon neutral publication first published this summer and distributed in the New York’s East End and select locations through-out New York City.

“We are delighted to bring his distinctive flair of journalism, insights, and opinions to users of our vaunted, 83-year-old brand — as we continue to establish ourselves as a cultural and celebrity authority that inspires, educates, and celebrates the individuality, beauty, and elevated style of individuals everywhere.”

Grazia USA is published under license from Italy’s Mondadori Group. the largest publishing house in Italy.

ABOUT GRAZIA:
Grazia is Italy's fashion bible, published by the Mondadori Group. For 80 years Grazia has remained in step with changing tastes season after season, style after style. At the top end of quality and design, Grazia is the most accomplished ambassador of the “Made in Italy” brand and is a preferred advertising vehicle for designer, fashion, and beauty companies. Thanks to its experience, excellence and brand value, Grazia is the first Italian weekly magazine to extend its successful formula abroad, with 21 editions worldwide in 23 countries, creating the most dynamic magazine network on the market.

ABOUT PANTHEON MEDIA GROUP, LLC:
Pantheon Media Group (PMG) is an independent next-generation media company that brings one of the most prestigious European fashion magazines to the biggest fashion market in the world. PMG is the exclusive publisher of Grazia USA, the latest franchise of the iconic fashion bible, first launched in Italy in 1938. Also uniquely focused on beauty, culture, society, status, celebrity, and luxury, Grazia USA publishes digitally first and later in print, with the release of the first of its quarterly 400-page magazines in 2021. Grazia USA does more than just inform and inspire an educated audience of influential readers: It is unlike anything the fashion industry in the United States has ever seen. We do not serve readers, we serve users. PMG is a 360-degree media business that is poised for the future, broadening storytelling into virtual and augmented reality, video, television, audio, e-commerce, live events, branded content, innovative advertising solutions and beyond. PMG is headquartered in New York City.