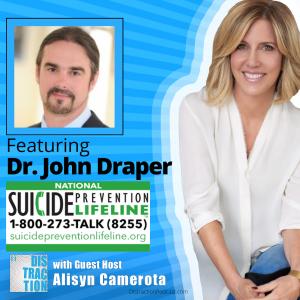 CNN’s Alisyn Camerota is joined by Dr. John Draper on Distraction Podcast to talk about the worrisome rise in suicide attempts particularly in girls aged 12-17.

Distraction’s guest-host, CNN Anchor Alisyn Camerota speaks with Dr. Draper about why suicide rates have increased by 10% every year for the past five years, and what role the pandemic has played in the startling increase in emergency room visits for girls aged 12-17 in particular.

“The number of teenage girls that have been seen in emergency departments during the pandemic was over 50% higher than what was seen before the pandemic, in 2019.” Dr. Draper says in this episode. “It's hard to know whether or not it's an increase in suicide attempts or just an increase in emergency department visits because kids are around the parents a lot more. Now the parents are actually seeing the distress,” he emphasizes in part 1 of the conversation that was released on Tuesday.

Camerota and Draper also discuss the alarming fact that 1 in 5 high-school aged kids thinks seriously about suicide. “So you’ve got a class of 20… four of those kids are going to be thinking seriously about suicide in that classroom. And then if you also count attempted suicides, it’s about one in 12 kids. So at least one of the kids in the classroom is likely to try to kill themselves.” Dr. Draper shares with Distraction’s guest-host.

The pair also talk about how parents can help kids who might be struggling with the pressures of social media. “It really starts with conversations… restricting is not nearly as important as doing it with them or being informed by them about their experience,” Draper says. “The more we try to make it a bad thing and the more we try to cut it out of their lives the more attractive it becomes,” he continues.

The Distraction podcast successfully launched its sixth season last month with guest-host CNN Anchor, Alisyn Camerota, and has featured episodes with Real Housewives of Orange County’s Heather Dubrow, ABC News correspondent Gloria Riviera and others for conversations about important parenting issues like raising resilient kids, social media, substance abuse, mom guilt, and how to talk to your kids about sex.

“I’m super excited to be hosting this series of Distraction. I’m hoping our listeners find our guests, through their own experiences, interesting, informative but most of all helpful as we muddle through parenting in these most challenging times,” Camerota said.

Camerota is anchor of CNN Newsroom with Alisyn Camerota and Victor Blackwell, weekdays from 2-4 pm in New York. She is an Emmy Award winning journalist and brings deep human-interest experience to Distraction. Camerota was recently featured on Forbes.com: CNN’s Alisyn Camerota On Career, Mental Health And ‘Radical Self-Care.’ Camerota's stint as guest host runs through September 30 with new episodes released on Tuesdays and Thursdays on all the major podcatchers and at https://www.DistractionPodcast.com.

Sounds Great!, the producers of Distraction, will be announcing a new guest host for the month of October to celebrate ADHD Awareness Month and offer continued support and resources for its expansive ADHD community of listeners.