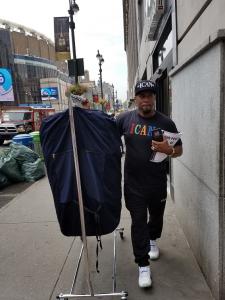 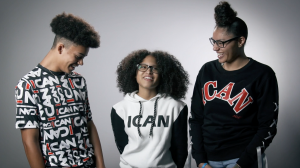 You are the brand. Comfort, purpose, and style are what you choose! ICAN is a style that lets you become the conversation!”
— Kelsey Battle

FAYETTEVILLE, NC, UNITED STATES, October 27, 2021 /EINPresswire.com/ — This Veterans Day we pause to acknowledge the challenges our enlisted men and women face in the field and back at home. Returning to civilian life can pose many challenges in fact according to a recent Pew Research Center survey of 1,853 veterans, 27% say re-entry was difficult for them—a proportion that swells to 44% among veterans who served in the ten years since the Sept. 11, 2001, terrorist attacks. One Fayetteville native and entrepreneur has beaten the odds even while dealing with bouts of post-military anxiety and in doing so has become a rising star in the fashion world. Meet Kelsey Battle, creator of the inspiring ICAN clothing line.

In 1999 while serving in the military at Fort Bragg NC, Sgt. Battle and his soldiers were on duty watching the aftermath of the notorious Columbine shootings. It was there in the weight of the tragic moment that Evangelist Billy Graham came on to deliver a powerful, life-affirming message and Kelsey saw despair juxtaposed with hope and he began to formulate a business plan for a clothing line reflecting a message of resilience.

Billy Graham’s words rang clear to him that day. He spoke from Philippians 4:13, which says, I can do all things through Christ who strengthens me. According to Kelsey, “If kids only knew the ICAN brand like they know Nike, Adidas or Rebook, something positive, we need to do something positive to empower the kids.” The acronym (ICAN), boldly displayed on each item is an encouraging theme of determination, purpose, strength, and direction not just for kids but for men and women, as well. It is a universal message combined with the current style.

Kelsey a happily married man for 27 years says the journey to get to this measure of success in his life was not without struggle. Growing up in a broken home, living in poverty with a drug-addicted mother was not easy but he had the strength to succeed and beat the odds. Kelsey had the ICAN theme purposely deposited in him even back then. As a senior in high school, he realized that his inability to read would lead him nowhere good. Being a person of faith, he prayed and begged God to show him how to read and faithfully God answered his prayers. Kelsey graduated and enlisted in the Army where he served his country proudly for 11.5 years in the 82nd Airborne Division traveling around the globe to Germany and South Korea.

Kelsey had a dream, but funds were tight, so the ICAN spirit kicked in again and the tenacious trendsetter worked three jobs to fund his first launch. By day he worked in the Army and nights and weekends were spent as a grocery bagger for the local market and a shoe store clerk. His hard work gave birth to a clothing business that inspires kids, and which mirrors the heart of the people. The trendy and contemporary designs can be easily worn for leisure or sportswear.

The sought-after designer whose creations are found online and soon in department stores nationwide knows what you wear delivers a message. Why not wear clothing that sends a positive vibe? “ICAN is clothing that lets you become the conversation.” From the Boss Lady Jogger Sets to the colorful rainbow jackets and camo coats you can become a walking billboard for tenacity and change. These stylish items are a complement to any wardrobe complete with accessories such as caps, backpacks, slippers, etc. There is something for the whole family including hoodies. sweatshirts, sweatpants, t-shirts, and many more.

Together with his wife their five wonderful children Kelsey is building more than a clothing line he is building a movement.

“You are the brand. Comfort, purpose, and style are what you choose! ICAN is a style that lets you become the conversation!” says Kelsey.